Has it been more than a year since you last had your chimney cleaned? Every chimney services agency including the Full Training recommends thorough annual chimney cleaning to keep your chimney, home and family safe. Here’s why. Above & Beyond Chimney Service has been addressing creosote and debris issues in chimneys since 1997. Our trained technicians have the tools and training to safely remove flammable obstructions from your chimney and reduce the risk of chimney fires and ventilation dangers.

Creosote is formed when smoke condenses in the chimney flue. It is highly flammable and responsible for most chimney fires each year in the U.S. You may have heard the news from August 2020 about the New York home of celebrity cook Rachael Ray going up in flames. Fire inspectors determined the cause was a chimney fire, which likely was the result of failing to schedule a regular chimney cleaning.

Chimney fires can be big, blazing events, but they also can be short, quick events that go out before anybody notices they’re happening. Even these smaller fires can be dangerous because they can start a cycle of damage to your chimney liner and eventually put adjacent materials of the home at risk.

Signs of a Chimney Fire

Be aware of the following:

If you experience any of these, immediately call 911 and extinguish the fire in the fireplace if safe to do so. Your chimney sweep is able to remove drafting obstructions from your flue to allow smoke and toxins to travel in the right direction, which is always up.

Obstructions such as bird and squirrel nests, the bodies of dead small animals, leaves, twigs and other tree debris can all narrow the passage within your chimney flue. This may result in a backup of smoke and deadly carbon monoxide into your home.

Carbon monoxide, which is present whenever burning wood produces smoke, is invisible and odorless. This means you won’t know it’s in your home until it’s possibly too late – carbon monoxide is known to be potentially fatal to people and pets.

Annual chimney cleaning solves the problem of an obstructed flue.

Chimney cleaning technicians at Above & Beyond are trained chimney inspectors, who can spot early signs of damage and malfunction throughout your chimney/fireplace system. This is the best way to stay on top of trouble and arrange for timely chimney repairs to prevent big, expensive issues later on. 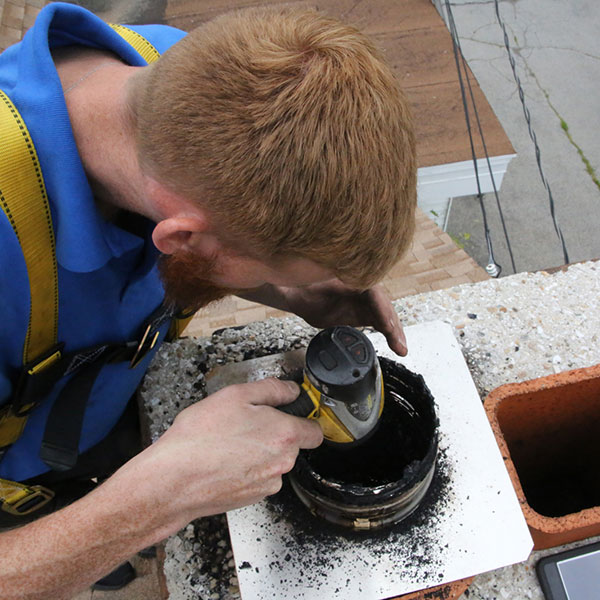 Chimney cleaning and chimney inspection should go hand in hand and be a part of your yearly home-maintenance schedule.

If it’s time for a thorough chimney cleaning, and especially if you’re having drafting problems or suspect there has been a chimney fire, call us today at (781) 383-0415.